Injured by a Motor Vehicle While Riding a Bicycle

A bicyclist must ride a bicycle in a proper manner.  At all times, both feet must be on the pedals when riding a bicycle. No person may be on a bicycle if they are not in a designated seat.  This means it is illegal for a person to sit on the handlebars of a bike while another person is riding it. A non-permanent seat may not be added to the bike. Both hands must be able to be on the handlebars. Carrying packages or items which may prevent either hand from accessing the handlebars is not permitted.  Further, carrying items that interfere with the operation of a bike is not allowed by law.  (See NYS VTL §§ 1230-1231; 1235.)

Further, the bike must be in good working order.  The brakes are required to function properly. The bike must contain a working bell or horn and have reflective tires and reflectors. A motor vehicle must be able to see a bicyclist, especially at night. A major cause of accidents between bikes and cars stems from a driver’s inability to spot a bicyclist.

Bicyclists must ride their bikes in the same direction as traffic and be on the same side of the road as if they were driving a car. Although both drivers and bicyclists have the right to use and enjoy public roads, bicyclists should ride their bikes in designated bike lanes or spaces to the far-right side of the road. These spaces are the safest location for bicyclist, as motor vehicles are generally not permitted to operate their vehicle in those spaces.  From one-half hour before sunset to one-half hour before sunrise, all bikes on the roadways must be equipped with a lamp on the front. (See, NYS VTL § 1236.)

Bikes must be operated in designated spaces, if such space exist.  If a bicycle lane exists, the bicyclist must be within the bounds of the designated bike lane. In the event there is no space provided for bicyclists, they should ride their bike near the right-hand curb or edge of the roadway or in a usable right-hand shoulder.  The bicyclists must ride in a manner as to prevent interference with the flow of traffic, unless it would be impracticable or dangerous to do so. (VTL § 1234.)

Who is at Fault?

In most motor vehicle accidents involving a bike, drivers are typically assigned a portion of fault; it is extremely rare for a driver to not be at fault. Even in a scenario where the bicyclist violates several Vehicle & Traffic Laws, the driver will share fault.

In New York State, all motor vehicles must have insurance. In the event of an accident with a bicycle, the motor vehicle’s insurance is generally the only policy availing coverage to the parties. If you are a bicyclist who has been injured in a motor vehicle accident, it is important to discuss your situation with an attorney to discover all insurance policies available for your protection. Here at the Law Offices of Jennifer G. Tocci, P.C., we investigate the accident as well as explore all avenues to ensure you recover the maximum insurance benefits available in your case.

There are three common instances of bike and car accidents that both drivers and bicyclists should take notice when on the road.

Be on the lookout for these situations and use caution when on the roadways.  A motorist should always be aware of bicyclists. However, this does not absorb the responsibility of a bicyclist when it comes to doing their part of ensuring safe measures when riding on roadways. Just because you legally have the right of way does not mean you are not at risk of being injured.

If you are a bicyclist who has been involved in a motor vehicle accident, contact the Law Offices of Jennifer G. Tocci, P.C., (631) 343-7676 to schedule your complimentary thirty (30) minute consultation to discuss your rights and options. 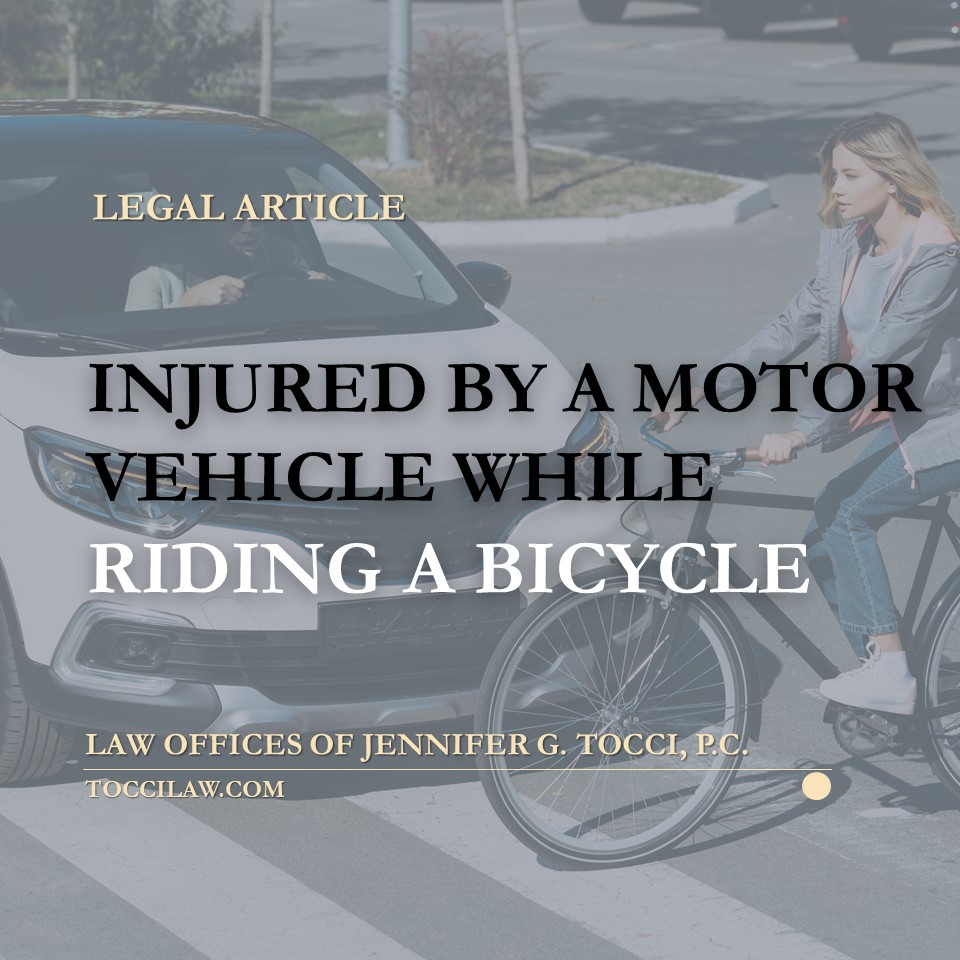