Effective November 1, 2020, New York State is expanding its seat belt law, New York State Vehicle and Traffic Law (VTL) §1229(c)(3), to require passengers in the back seat to wear a seatbelt, regardless of age. The law currently permits back seat passengers over the age of sixteen years old to opt out of wearing a seatbelt.  In the event of a crash, seatbelts absorb a portion of the force of impact, reducing the risk of being injured or killed.  When a seatbelt is worn properly, it prevents the body from being tossed around of or ejected from the vehicle in an accident.  Backseat passengers are not immune from being thrown around or ejected from a vehicle during an accident.

Requiring backseat passengers to wear seatbelts can seriously reduce the death of driver and front seat passengers while in a car crash. Studies demonstrate that numerous deaths of front seat occupants directly resulted from the impact of back seat passengers who were not restrained. Back seat occupants not only put themselves at risk while in an accident, but risk fellow passengers’ lives. According to the Center for Disease Control, more than half of teens aged 13 to 19 years old, and adults aged 20-44 years old, who have lost their lives while in an accident in 2018, were not buckled up at the time of the collision.

Governor Cuomo stated, while speaking about the newly signed legislation, “we’ve known for decades that seat belts save lives and with this measure we are further strengthening our laws and helping to prevent needless tragedies.” According to the Governor’s Traffic Safety Committee, 30% of highway deaths in New York are occupants who are unrestrained by a seatbelt. According to experts, this expansion of the law could prevent over two-thirds of fatalities and serious injuries sustained in a motor vehicle accident.

Since November 1, 2020, in New York State, a driver may be issued a ticket for each passenger who is not buckled in properly, regardless of their positions in the vehicle. Each violation involving a passenger under 16 years old with an improper safety restraint carries a three-point penalty towards the driver’s NYS License record. [Sidebar: the DMV will suspend a driver’s licenses if he/she accumulates 11 or more points in an eighteen-month period]. Although no points are assessed toward the operator’s license for those over age 16 with no license, the driver may receive a ticket that accompanies a fine for each violation.

Accordingly, the law imposes the responsibility on the driver to ensure that his/her passengers are all properly using seatbelts. If a driver has passengers who are not buckled up properly at the time of an accident, those passengers could allege the driver is responsible for their injuries- even when the accident was not caused by their driver. Similar to any infraction of New York State Vehicle and Traffic Law, a seatbelt violation can be asserted as a basis to show that a driver was negligent, even where a ticket was not issued.

Conversely, since those over the age of 16 may receive tickets as front-seat occupants of the vehicle for not wearing a seatbelt. In the event of an accident where the passenger seeks to hold the driver responsible, the driver may be able to assert that the front seat passenger assumed the risk.

Young drivers may be more likely to be adversely affected by the change in the law in the event of a car accident.  Young drivers traveling with minors in their vehicle may find it difficult to enforce their passengers wearing a seatbelt, especially if the passengers are in the same age range. This is especially concerning in light of the new law. A young driver finding it difficult to require passengers to buckle up could also find themselves accused of contributing to injuries after an accident. Those same passengers who refused to wear a seatbelt could allege that the driver was negligent by violating the new law, and that negligence contributed to their injuries.

The amended law could have a secondary effect of providing those who caused accidents with more avenues for placing blame elsewhere. Defense counsel and insurance companies almost always assert that a plaintiff (person suing for injuries) was negligent by failing to wear a seatbelt. This hand is often played to the fullest extent when the at-fault driver cannot otherwise place liability for the accident on another party. If the at-fault driver can prove that because the plaintiff did not wear a seatbelt their injuries were exacerbated, the at-fault driver may not be responsible for those additional injuries. In light of the newly amended law, at-fault driver could accuse the backseat passenger’s driver of contributing to their injuries. The at-fault driver may only marginally show that the passenger’s driver should share in the fault. By failing to ensure that all passengers are buckled up, regardless of age or position in the vehicle, an at-fault driver could show another driver was partly responsible for his/her passengers’ injuries. In New York, any portion of liability, no matter how small, can offset the at-fault driver’s obligation to compensate the injured party. However, it is the defendant’s burden to prove this to the jury or fact finder. As attorneys for injured parties, we prevent the defendant from bringing weak assertions without proof to the jury.

Make a habit of buckling up every time you enter a vehicle, no matter what your position is in the car. Being held liable for injuries is the least of your worries when it comes to injuries sustained to family and friends in your vehicle. This small action can save your or a loved one’s life.

To speak with our attorneys, please schedule a complimentary consultation to learn your rights and options after an accident. Law Offices of Jennifer G. Tocci, P.C. (631) 343-7676. 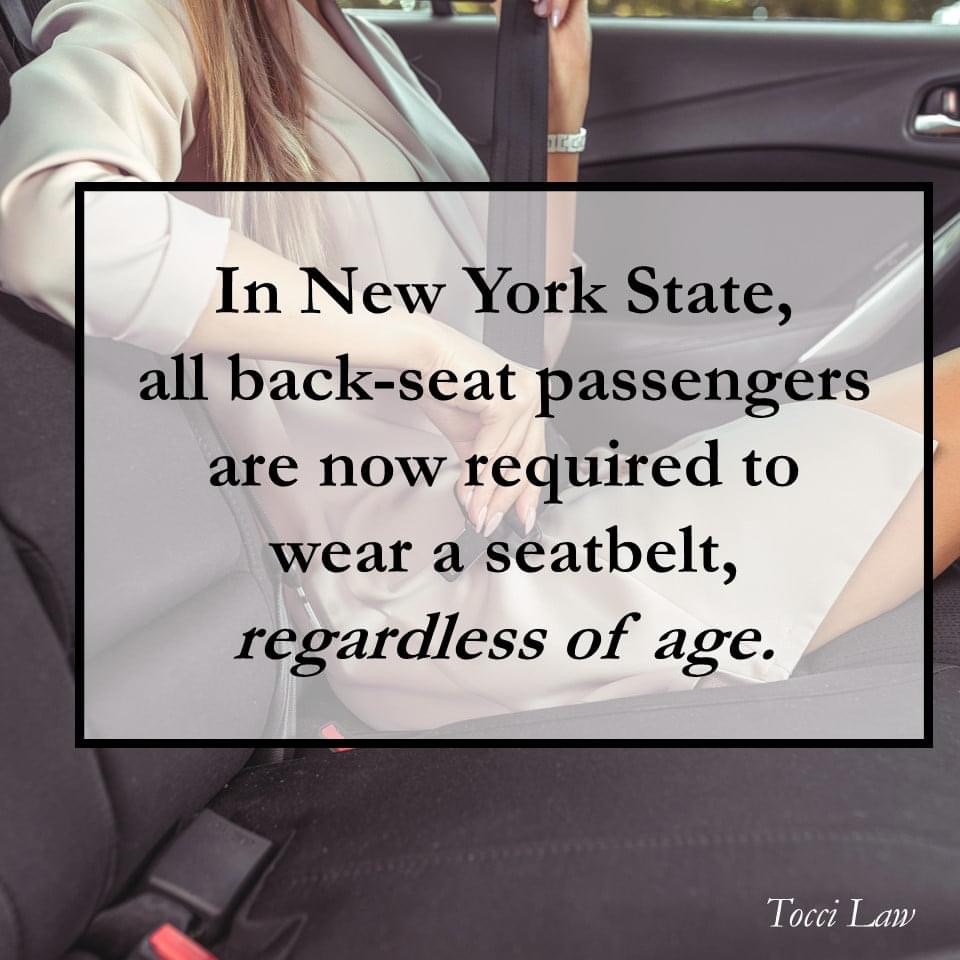