As of December 14, 2019, the Green Light Law has taken effect, which allows any individual to apply for a NYS driver’s license, regardless of immigration status. The bill, signed by Governor Andrew Cuomo, removed the citizenship and social security number requirements for application for a NYS driver’s license. Instead, undocumented immigrants will be permitted to produce alternative forms of identification when applying for a driver’s license, including a passport that is valid or is expired less than two years. Reportedly, the New York State Department of Motor Vehicles (DMV) is training its staff to identify authentic documents.

While there is a myriad of arguments for and against allowing undocumented immigrants to obtain driver’s licenses, this article addresses the pros from a personal injury perspective.

The licensing requirements were enacted to keep our roadways safe. All individuals who operate vehicles in NYS should be required to satisfy the State’s licensing requirements. NYS issues driver’s licenses only to those individuals who have passed a road test.  The purpose of the road test is to ensure that drivers are qualified to operate a motor vehicle safely. With implementation of the Green Light Law, undocumented immigrants seeking licensing must fulfill all NYS pre-licensing requirements. Typically, a new applicant will be first required to obtain a learner’s permit.  In order to qualify for a learner’s permit, applicants must pass the written permit test.  The written permit test consists of twenty multiple choice questions regarding the rules of the road and driving maneuvers. Subsequently, an applicant must compete a DMV-approved five-hour pre-licensing course.  The course covers important topics, such as drinking and driving.  Applicants under 18 years old must hold a learner’s permit for at least six-months prior to scheduling the road test.  Once the pre-licensing requirements are met, the road test may be scheduled.  During the road test, a NYS license examiner evaluates the applicant’s driving abilities and determines whether he/she is a competent driver. If so, NYS will issue the applicant a driver’s license.

Additionally, a licensee (driver) must pass a vision test when applying for or renewing a NYS driver’s license. A driver must have the visual acuity of at least 20/40 on the Snellen Visual Acuity Scale in both eyes with or without corrective lenses. If a driver must wear corrective lenses to see adequately, an indication is documented on his/her driver’s license. Without requiring undocumented immigrants to submit to a vision exam, there is a populace of NYS drivers whose vision is unknown and unregulated.

It is in the best interest of the public that all drivers on the road are fit to drive. By not allowing undocumented immigrants to partake in the licensing conditions, there is no way to evaluate whether they can drive effectively.  The safer approach is to compel all drivers to complete the licensing requirements, regardless of immigration status.

NYS imposes fines and sanctions for those who violate the Vehicle & Traffic Laws (VTL) and Penal Laws. The DMV maintains a lifetime record for each driver, documenting the number and severity of accidents and traffic infractions. There is a point system, for which points accumulate on the license when there is a conviction for violating certain traffic infractions. Accumulating 11 or more points on the license in an 18-month period results in a suspension of driving privileges. Driver Responsibility Assessment fees are imposed for violations of certain infractions and if a driver accumulates 6 or more points on the license in an 18-month period.  Records allow New York State to keep track of each driver and impose appropriate civil penalties when necessary.  Police officers and insurance companies will have reliable records for more drivers.

Increase in Registered and Insured Vehicles on the Road:

Regardless of immigration status, driving without a valid driver’s license is a crime in New York State. Convictions of NYS’s laws pertaining to unlicensed driving may accompany imprisonment, a criminal record, fines, probation, and fingerprinting. (See, NYS Vehicle and Traffic Law §§ 509; 511-1; 511-2; 511-a.)  Nevertheless, it has not deterred undocumented immigrants from operating motor vehicles without driver’s licenses. Without a driver’s license, an individual is not able to register and insure a motor vehicle in his or her name in New York State. Therefore, drivers who are unable to obtain licenses are driving vehicles owned and insured by other people, or operating unregistered, uninsured vehicles on the road.

Thus, previously, if you were injured in an accident with an unlicensed driver, you likely faced an insurance issue. If you did not carry insurance that protects you in the event you are injured by an uninsured/underinsured driver, compensation for your injuries was limited. In certain situations, you could be barred from personal injury compensation if you were injured by an unlicensed driver.

Promotion of Fairness in Assessments of Liability:

In a car accident, the involved insurance companies assign liability based on fault. The percentage a party is liable for an accident, is the percentage that party is on the hook for compensating personal injuries. Although insurance companies assign liability to the involved parties, the jury is not bound by the insurance companies’ assignment of liability. In any case, arguments have been assembled in support of assigning blame or added blame to a party by virtue of that party not holding a driver’s license.  In fairness, when a party is not the immediate and direct cause of an accident, he/she should not be deemed responsible for an accident- especially if he/she is legally unable to do so.

Potentially Stiffer Consequences for Not having a Driver’s License:

As mentioned above, driving without a valid driver’s license in New York State is a crime.  Unlicensed driving infractions are issued to anyone who does not have a valid license, not just undocumented immigrants.  Unlicensed driving tickets may be issued when a license has been suspended, revoked, Scoffed, failed to renew, etc. Currently, the court system is flooded with dockets that involve unlicensed driver infractions. Resolution or plea deals depend upon a number of circumstances, including, the accompanying tickets that were issued, the courthouse, the District Attorney/Prosecutor, and other circumstances unique to each specific case. However, now that undocumented immigrants are permitted to obtain New York State driver’s licenses, increased sentences may accompany individuals who are convicted for unlicensed driving violations. 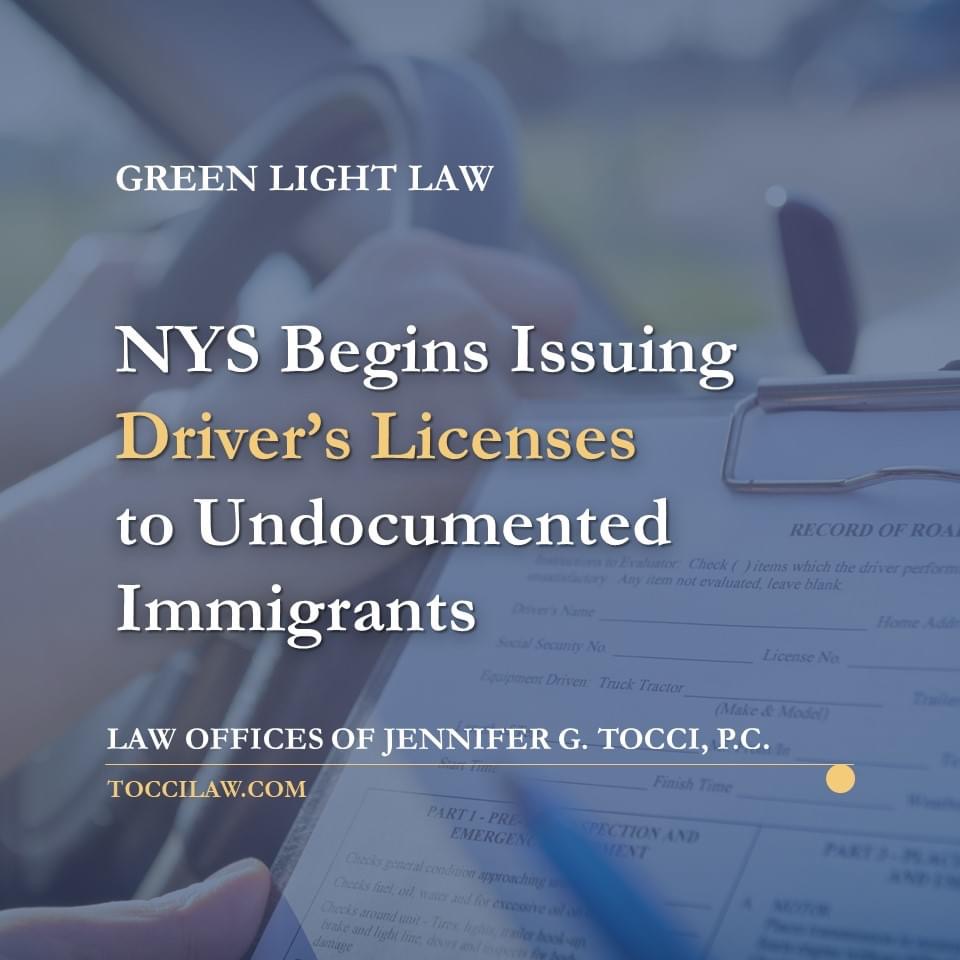