Proving Who Is At-Fault After An Accident

In order to have a successful lawsuit for personal injuries, you must be able to prove that another party is liable (or legally responsible) for the accident. Liability is an essential part of each case; even where you experience severe injuries, unless you can prove it is someone else’s fault, they will not be required to pay compensation, medical expenses, and lost wages. In New York State, liability is not an all or nothing game. If you can prove that a party is partly responsible, they will have to pay for their portion of involvement in causing your injuries. In cases where there are extremely serious, grave injuries, showing that another party is even one percent (1%) at fault, can be the difference between success and failure.

Who decides who is at fault?

During the negotiation process, the parties are permitted (and encouraged) to agree as to who is liable and in which percentages. If an insurance company is involved, it may accept a certain portion of liability after assessing the facts. If multiple insurance companies are involved, they may agree on liability, or they may arbitrate and fight over who is responsible. Insurance companies and individuals may elect to proceed to mediation or arbitration to determine fault. However, unless they do so with the intent of never stepping foot inside of a courtroom, the decision is usually not binding on the parties. Therefore, the parties can adjust the amount of liability they are willing to accept at any time.  Changes in original agreements occur when proof dictates a change, or when the parties are put forth an effort to settle. Frequently, in an accident where it is extremely unclear which party is at fault, or in an effort to facilitate resolution, the parties involved will split liability evenly (50%-50%) for the sake of a settlement agreement. It is common practice that, at settlement, none of the parties will admit that they are liable, despite paying fair and just compensation for injuries caused by an accident. Prior to entering a courtroom, liability percentages are adjustable only to the extent that each party is willing to agree. In essence, accepting a portion of liability (or none or all liability), is that party’s way of saying they are willing to pay for that portion of the damages. However, no jury is bound by the liability apportionment discussed between the parties. In fact, it is an essential function of the jury to determine which parties are at fault and in which percentages. Thus, liability is either voluntarily accepted or determined by a jury or legal tribunal.

Who must prove fault?

The judge will read to the jury civil jury instructions on liability. The jury instructions set the parameters for how it can make its decision as to who is liable. Typical jury instructions in a personal injury lawsuit may include, “negligence is the failure to do something a reasonable person would do under the circumstances, or doing something a reasonable person would not do under the circumstances…” In car accident cases, proving that an at fault party or defendant was acting unreasonably can be established by demonstrating that they broke the law. For example, if a plaintiff can show that a driver was operating his/her vehicle at 90 miles an hour, unless the defendant can show it was reasonable to break the law, exceed the speed limit, and drive at a rate of speed of 90 mph, the jury will likely find that the defendant was acting unreasonably.

How do you prove fault?

You prove fault the same way you prove anything to jury, and that is with evidence. Evidence can be in the form of video, surveillance, photographs, pictures, witness testimony, accident reconstruction, diagrams, medical records. Every single case is different and the evidence available in every single case is different. At Tocci Law, we aim to expose and frequently re-displayed to the jury pieces of evidence that are favorable to our clients. Additionally, we make every effort to exclude, limit, or minimize evidence that does not look good for our client.

Evidence created in the eleventh hour before trial is generally (but not always!) the weakest. It is important to discover whether any surveillance and cameras exist in the area surrounding the accident. If you are fortunate enough to have photographs taken at the scene, those will be extremely important. Secure witnesses’ names as soon as possible. Witnesses frequently go missing because their names and addresses were not obtained. Witnesses who tell you what they saw, or tell the police what they saw, are of no help without testimony directly from the witness. Witness statements contained in a police report or told by another person are considered hearsay. Hearsay is almost always inadmissible in court. Even in cases where there are no witnesses, video camera surveillance, or camera photographs, document everything following the accident. Take photos of the damage, areas of impact can often assist in showing who is at fault. Tocci Law has a previous blog about how to take photos after an accident.

Depending on the matter in which you sustained your injuries will depend on how you are required to show fault in court. In injury cases, we most frequently must show that the defendant was “negligent.” Negligence means that a person failed to behave with the level of care that a reasonable person would have exercised under the circumstances. There are four elements to proving negligence: 1) duty, 2) breach, 3) causation, and 4) damages. What this boils down to is that first you have to show that the defendant had a duty to keep you safe. For example, when operating a motor vehicle on a public road, the driver must follow certain rules of the road. In New York State, the Vehicle and Traffic Law is enacted to keep all drivers safe: passengers, pedestrians, construction workers, etc. Therefore, by operating a motor vehicle, you have a duty to abide by those rules in order to maintain safety. Once this duty is established, we must prove that the defendant breached that duty, which is frequently established by merely showing the driver violated such laws. Successfully showing that a defendant had a duty, and that duty was breached, is not enough to prove negligence. You must go further and show that those actions caused the injuries. Imagine a situation where an unlicensed driver is on the road, properly stopped at a red light. Another driver comes along, speeding and runs a red light, striking the unlicensed driver’s vehicle. Although the unlicensed driver violated the Vehicle and Traffic Laws, it is not his or her lack of a license that caused the accident. [Sidebar: Tocci Law makes every effort to place liability where we can for our clients. In this case, depending on additional facts, so we may attempt to show that the unlicensed driver did contribute to the accident.] Therefore, the plaintiff must prove that the defendant’s direct actions caused the accident. Lastly, the plaintiff must show that their injuries are a result of the accident caused by the defendant. If you are in a car accident, even if it is somebody else’s fault, even if there is substantial property damage- if there are no injuries, or if the injuries were sustained elsewhere- the person who caused the accident will not be responsible for those injuries.

If you were involved in a situation where you sustained injuries, call the Law Offices of Jennifer G. Tocci, P.C., for a free consultation to discuss your rights and options (631) 343-7676. 353 Veterans Memorial Highway, Suite 200, Commack, New York 11725. 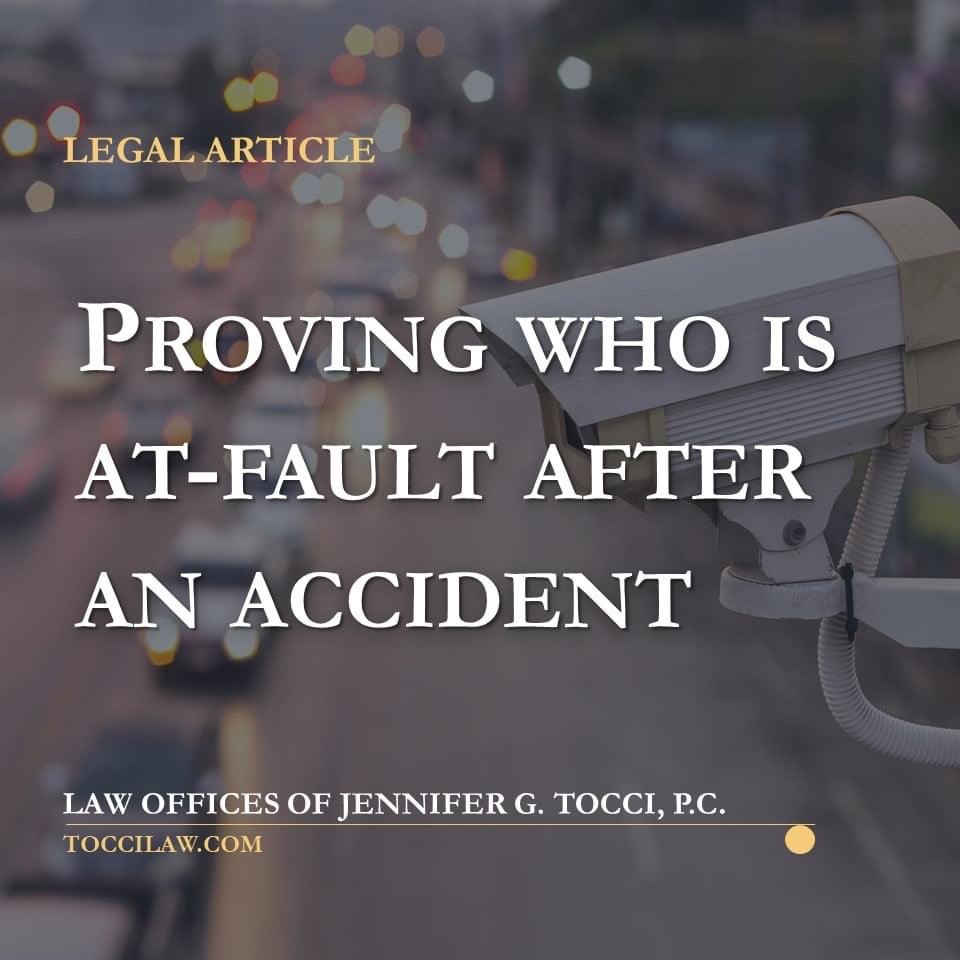