Warrantless Searches and Seizures of Property 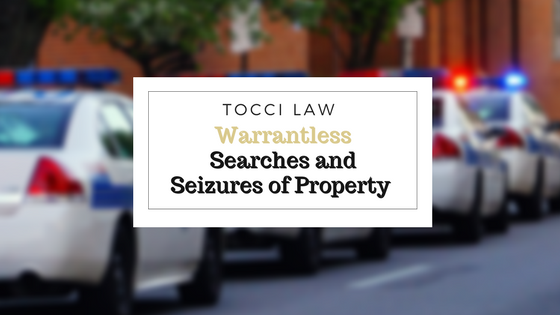 As Americans, we have a constitutional right to privacy, protecting us from unreasonable searches and seizures of our private property. That means that evidence found during an unreasonable search may not be used against a defendant.

First let’s define “search,” “seizure,” and “unreasonable.” A search is where the police intrude into an area where a person has a reasonable and justifiable expectation of privacy. A seizure is where the police exercise control over a person or thing. Less clearly defined is the word, “unreasonable,” which depends largely on the circumstances of the individual situation. Frequently, searches and seizures conducted without a warrant are considered unreasonable. However, there are six circumstances where searches and seizures may be legally conducted without a warrant. This article will provide a general overview of searches and seizures of property and evidence (as opposed to the seizure of a person [arrests & detentions]).

When can the Police Search and Seize your Property Without a Warrant?

Additionally, the expectation of privacy does not extend to the areas outside of the house and especially does not extend to areas outside of the fence. Garbage may be searched without a warrant. In certain circumstances, structures on your property could be legally searched without a warrant depending on factors such as the distance from your place of living, whether they’re on the inside of a fence, if it is used for activities of the home, and if the resident has taken steps to protect the structure from the view of people passing by.

The police may approach a home in the hopes of speaking to a resident. Therefore, if a police officer is invited in, and contraband is plainly visible, it could lawfully be seized. In certain circumstances, it could lead to enough probable cause for the police to search the property, depending on the facts and the scope of the search.

While the police are permitted to knock on the door, they are not allowed to bring a drug dog sniffing around the entry of the residence without a warrant.

Items Held Out to the Public:

The courts have held that a person does not have a reasonable expectation of privacy for objects held out to the public. What are items held out to the public? The sound of someone’s voice, one’s handwriting, paint on the outside of a car, the smell of one’s luggage or car, account records held by the bank, or magazines offered for sale are a few.

Stopping a car is a seizure for purposes of the Fourth Amendment of the United States Constitution. Therefore, generally, the police may not stop a car unless they have at least reasonable suspicion to believe that a law has been violated. (Sidebar: Police roadblocks to stop cars without individual reasonable suspicion that the driver has violated some law is valid where there is a neutral, articulable standard for stopping the cars and closely related to a particular problem pertaining to automobiles and their mobility.)

In New York, legally, you have a lower expectation of privacy in your vehicle than in your home. Therefore, when you are pulled over, there are several situations where the police may search your car without requiring a warrant. Although the police must have “reasonable suspicion” to pull you over, they may search your car without a warrant if they have a legitimate, fact-based reason for searching it. The automobile exception rule allows police to search your vehicle without a warrant if the police reasonably believe that you have evidence of a crime or contraband. They are able to search your car specifically to look for that item. If the police have full probable cause to search a vehicle, they can search the entire vehicle, including the trunk and all containers in the vehicle that might contain the object for which they are searching. As in your home, (as we touch on above) if you are pulled over and you have contraband in plain view, those items are fair game to be seized and used as evidence against you.

Unlike in your home, where a police officer lawfully pulls over a vehicle and doesn’t extend the stop time, a drug detection dog may sniff. Drug dog sniffs made during a routine traffic stop can form the basis for probable cause to justify a search of your automobile.

The Six Exceptions to the Warrant Requirement:

Search Incident to a Lawful Arrest:

If an arrest violates the Constitution, then any search incident to that arrest also will violate the Constitution. However, the police may conduct a search incident to a lawful arrest. The police may search the person and areas into which he might reach to obtain weapons or destroy evidence (known as his/her “wingspan”). The arresting officers do not need to actually fear for their safety or believe that they will find evidence of a crime in order to conduct a search after a lawful arrest. The police may also make a “protective sweep” of the area beyond the defendant’s wingspan if they believe accomplices may be present.

When You Provide Consent:

This may seem obvious, but it’s worth mentioning that if you provide the police with consent to search your property, anything found during that search may be used against you. Consent may be express or implied. Therefore, the only way to consent isn’t by verbally providing it, or signing documents. In certain situations where you are driving an automobile under the influence of drugs or alcohol implied consent may be deemed provided.

Where the police are lawfully present, and contraband or evidence of a crime is plainly visible, they may lawfully seize it without a warrant. Additionally, the incriminating nature of the item or the illegality of it must be immediately apparent. For example, if you call the police for a domestic violence incident and invite the police into your home and you have cocaine in plain view, you can be arrested for possession of an illegal substance, even though the police did not have a warrant to search your home.

The police may stop and frisk you if they reasonably believe you have been involved in a criminal act. The encounter is supposed to be brief and is limited to a pat down of the outer clothing to search for weapons. However, the police officer may reach into an area of the suspect’s clothing if he has specific information that a weapon is hidden there, even if that information comes from an informant’s tip lacking sufficient reliability. The police officer may then seize any item he/she reasonably believes, based on “plain feel” is a weapon or contraband.

Stop and frisk apply to those pilled over properly for a traffic violation, even if the officer does not have a suspicion of criminal activity.

Police officers in hot pursuit of a fleeing felon may make a warrantless search and seizure. The scope of the search may be as broad as may reasonably be necessary to prevent the suspect from resisting escape. When the police have reasonable cause and attempt to make a warrantless arrest in a public place, they may pursue the suspect into a private dwelling.

Emergencies that threaten health or safety, if not immediately acted upon will justify a warrantless search. This includes situations where police see someone injured or threatened with injury. However, in New York, where the police are called to a drug or alcohol emergency, the 911 Good Samaritan Law prevents the officer from making arrests for certain drug possession, drug paraphernalia, and underage consumption of alcohol that may be in plain view at the scene. (For more information, see our past article on the 911 Good Samaritan Law.)

If you have been arrested, speak with a skilled attorney. Contact the Law Offices of Jennifer G. Tocci, P.C. to discuss your rights and options (631) 343-7676.