What if I am in a Motor Vehicle Accident with a Government Vehicle?

What if I am in a Motor vehicle Accident with a Government Vehicle?

Special and unique laws and procedures apply to lawsuits for injuries caused by an auto accident involving a governmental vehicle. There are specific rules that apply to suing the state government and separate rules that apply to suing the local governments. The applicable rules restrict the time to file a claim and add steps that must be completed shortly after the accident. Thus, it is extremely important to hire an attorney immediately after an accident involving a governmental vehicle to avoid waiving any rights you have to file a lawsuit.

What is a Governmental Vehicle?

Claims Against the State:

The United States and the individual states have sovereign immunity, meaning that they cannot be sued for injuries caused by conditions of their property or for the acts of their employees/agents.  However, New York State waived its sovereign immunity, providing those who are injured a means for seeking compensation for their injuries caused by the government. In a lawsuit against the State of New York, the procedure is governed by what is called the “New York Court of Claims Act.” Similar to suing an individual, you are also able to sue the government except in a special court called the Court of Claims. [Sidebar: the waiver of sovereign immunity only applies when an individual wants to sue the government for negligence. Examples of this includes, car accidents, defects in public buildings, or any kind of medical care or treatment.] An example of a state agency would be the New York State Troopers or state park police.

As in any lawsuit for personal injuries, the injured party must prove that the government was negligent.  You must show (1) the state owed a duty of reasonable care to the claimant, (2) that duty was breached, (3) the state caused the claimant’s injuries, and that (4) there was a result of compensable damages, for example, pain and suffering, medical bills, lost wages, etc. In a case involving a state vehicle, negligence is usually proven by showing that the driver of the state vehicle violated the NYS Vehicle and Traffic Law.

Pursuing a lawsuit against a local government (i.e. not the state) is more similar to suing an individual.  Examples of the local government in our area is Suffolk County, Nassau County, Village of Northport, Village of Asharoken, Town of Smithtown, Town of Islip, Town of Brookhaven.  The police, park police, and highway departments are examples of divisions of the local government.  A lawsuit against the local government, unlike suing the state, can be initiated in the same courthouse you would start an action against a regular party.  Thus, you can sue the County of Suffolk in Suffolk County Supreme Court and Nassau County in Nassau Supreme Court. As with any lawsuit, you must be able to prove that the government was negligent, and you were injured as a result of that negligence. You do not need to suffer a threshold injury (see above) in an auto accident cause to have a successful case against a local governmental agency. Understandably, however, the more serious the injury, the stronger the case.

Time Limits for Filing a Claim:

Regardless of whether your claim for injuries sustained in an accident is against the state or local government, a Notice of Claim must be filed within ninety (90) days from the date the accident occurred. [Sidebar: 90 days is not the same as three months, and when calculating the time, you should always count the number of days.] This claim provides the government with notice that there is a potential lawsuit that may be filed in the future. The 90-day deadline arises quickly, and frequently, injured parties have not selected an attorney this close to an accident. Thus, hiring counsel as soon as you are able after an accident is best. You do not want to waive any of your rights by failing to meet a deadline that is critically short.

Once the Notice of Claim has been timely filed, an action must be commenced within a year and ninety days after the accident. In auto accident matters that do not involve a governmental agency in New York State, you would have three (3) years to file a lawsuit against the at-fault party.

The special time restraints do not eliminate time restraints with respect to non-governmental parties.  Thus, you must file your No-Fault Application with the automobile insurance company within thirty (30) days in order to receive No-Fault benefits for medical care and lost wage reimbursement.  Failure to apply within thirty (30) day from the date of the accident could forfeit your right to receive No-Fault benefits.  While medical bills and lost wages may be sought against the government, you could bear the loss for medical bills and lost wages instead of the insurance company or government.

In addition to the rules and filing deadlines contained in this article, there may be other time limitations and requirements specific to your matter. We recommend contacting us as soon as practical, even if you are unsure if your matter involves the government.  We will analyze your individual situation and timely satisfy the necessary requirements. Schedule a complimentary consultation to discuss your case: Law Offices of Jennifer G. Tocci, P.C., (631) 343-7676 // assistant@toccilaw.com. 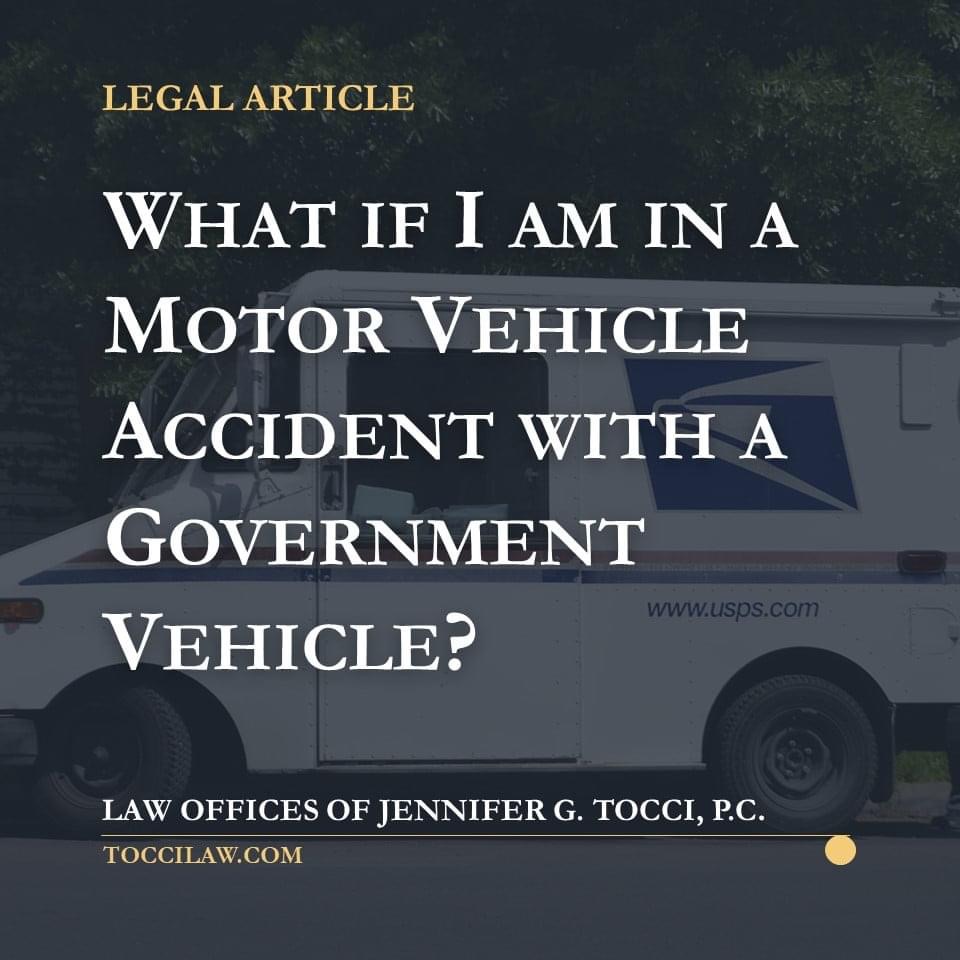