What is Assault in the First Degree? 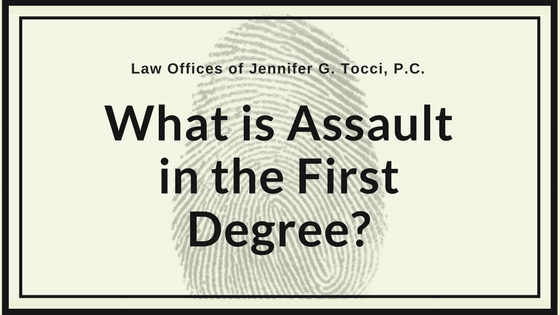 What is Assault in the First Degree?

Assault in the First Degree (NYPL § 120.10) is the most serious assault charge of the three degrees.  It is a class B Felony and a “violent crime” (making it more serious than a non-violent crime in the same class).  Anyone convicted of this crime in New York will have a criminal record. Further, you face a minimum of 5 years in jail and a maximum of 25 years, even without any priors.  In addition to jail time, you may have to pay fines and restitution, be on probation, and be served with an order of protection.

In sum, if a person causes serious injury to another AND:

How can this charge be defended?

Each situation is different and your case may have additional or different defenses than those outlined here. Disputing the facts of the case is one way that may defeat your charges.

As in any other crime, in order to be convicted, the District Attorney must prove to the jury or fact finder that beyond the shadow of a doubt, a person is guilty of the above.  As a result, a strong defense can be to show that one or more elements above did not exist. First, if there were no true serious physical injury, you cannot be convicted of this crime; even if some of the other elements of the crime are present, serious injury alone is not enough for a conviction. Secondly, if there were physical injury to another, if you can successfully show that the intent characteristics were not satisfied you might successfully be able to overcome this charge. (For example, the injuries were an accident, or there was no weapon present.)  Lastly, if there were no felony being committed while someone was seriously injured (and no other intent elements exist), you could defeat the charge.

Self-defense/ defense of others:

Self-defense and defense of others is an affirmative defense.  Asserting an affirmative defense is admitting you committed the crime, but asserting that there is a legally permissible defense that overcomes criminal liability.  This is probably the most common defense asserted in assault cases. You must be able to show that you reasonably believed it was necessary to defend yourself and the force you used was the minimum necessary.  Therefore, you must show that the other person provoked the conduct and he/she was the initial aggressor. However, if the initial aggressor retreats, self defense will not be a strong defense unless you reasonably believe that person was committing kidnapping, forcible rape, forcible criminal sexual acts, robbery or burglary.

First Degree Assault is a serious and complex legal issue and can differ greatly from cases to case. There may be other defenses that are specific to your unique situation. A skilled attorney will be able to evaluate whether there are other defenses available to defend your case.

No matter which degree of assault you’ve been charged with, consulting with your attorney is the best way to devise a plan for your specific case.  For a free case analysis call the Law Offices of Jennifer G. Tocci, P.C.