What should I do if my police report is incorrect?

What should I do if the police report from my motor vehicle accident is incorrect?

In an automobile accident, a police report is one of the first instruments attorneys and insurance companies use to evaluate your case.  When the police are called to the scene of an accident, they gather information from the evidence, witnesses, the drivers and passengers to prepare the police report.

The police report contains accident information such as where and when the accident occurred, the names and ages of the drivers, names and ages of the passengers, types of vehicles, owners of the vehicles, if there were any fatalities, location of the damage on the vehicles, if any traffic infractions were issued, contributing factors to the accident, etc. Unfortunately, this information is frequently inaccurate, incomplete or even biased.  An incorrect police report may be damaging to your case, as liability might be assessed based on an inaccurate description of the accident.

The larger the degree of inaccuracy of the police report, the more detrimental it could be to your case. While even minor details can distort the truth, large or numerous errors may be harmful to the outcome of your case.

What information is in the police report?

Will errors in a police report be used against me?

[Sidebar: The liability assigned to each party by the insurance companies is not law and it is not binding. Therefore, in the court system, liability could be assessed differently.]

Am I able to successfully dispute an inaccurate police report?

Strong evidence, such as video recordings or photos may overcome an inaccurate police report. Please visit our article, “How to Take Pictures of Your Vehicle After an Accident” for more information.  The more photos you have to support your recollection of the accident, the better off you will be.  Take as many photos of your vehicle, all other vehicles involved, and the overall scene of the accident. Include any relevant objects such as streetlights, stop signs, property damage, debris in the roadway, and buildings. Taking different angles of the vehicles involved including their registration sticker on their windshield and license plate number could also be of benefit to you.  Photographic evidence is crucial in any case but is even more vital in a case with an incorrect police report. The more evidence you have to support your claim, the better.

Is there a way to amend (correct) a police report?

You cannot amend the police report.  The only way that the police report may be amended is for the original officer to make changes.  It is not recommended that you attempt to contact the police officer on your own.  It is best if your attorney contacts the precinct and request the amendment.  Unfortunately, if the officer is unwilling to amend the police report, the document will remain unchanged. This is especially true where the parties are in dispute of the facts and/or there is no evidence to support your claim. Even when strong evidence to dispute an incorrect police report exists, the report may not be amended. Therefore, it is important to have strong proof to support your claim. It is equally important to hire an attorney as early as possible.

What you can do about it?

Hire an attorney to represent you.  At Tocci Law, we investigate our accidents independently, in addition to obtaining and potentially seeking amendment of the police report. In addition, we create an accident reconstruction map, recreating an accurate representation of the accident, which is often helpful in overcoming erroneous police reports. Schedule a free consultation to discuss how we can assist you in your accident case. 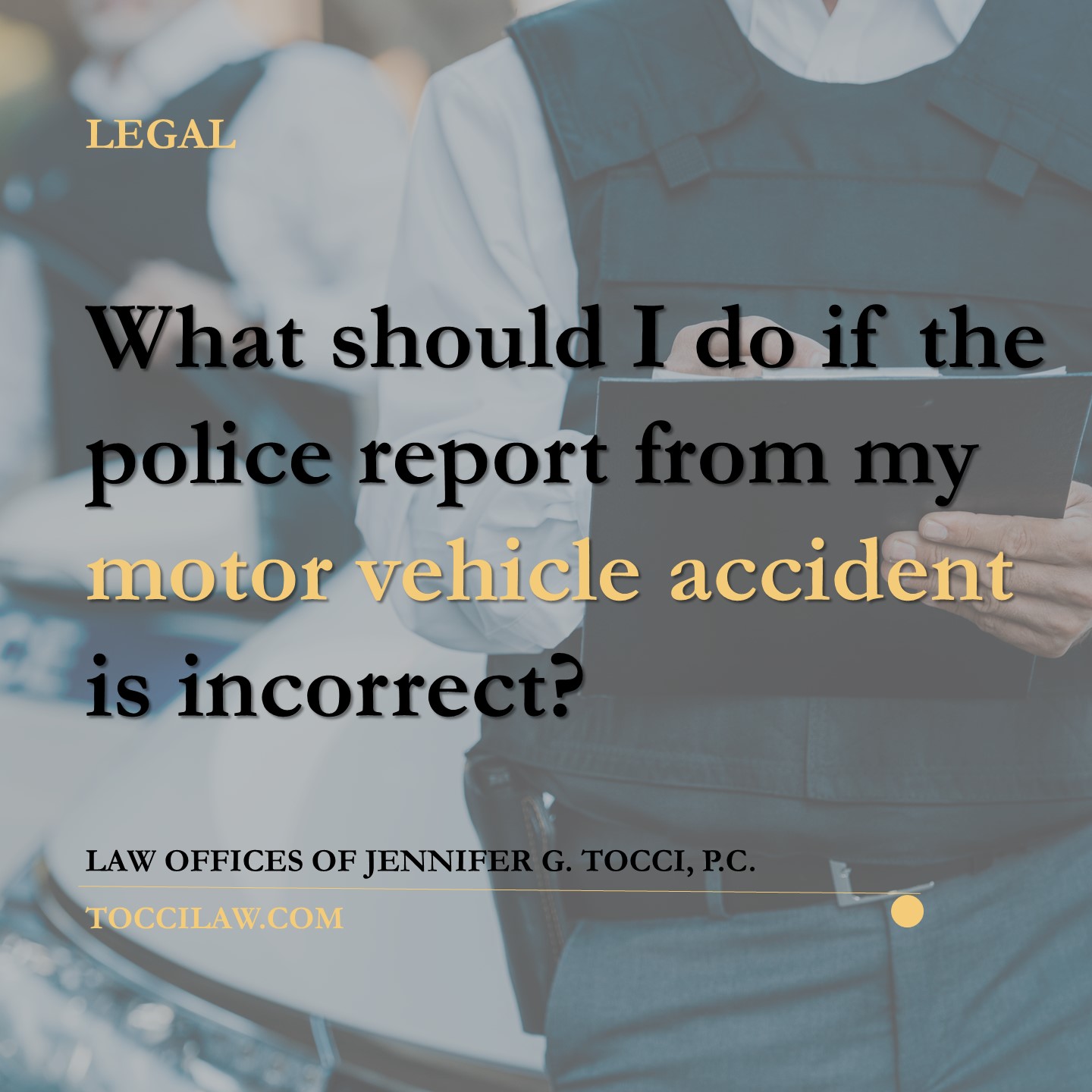