Who is at Fault in a Rear-End Accident?

A rear-end accident occurs when the front end of one vehicle collides with the backside of the vehicle in front of it. Rear end accidents vary in severity, from fender benders to high-speed, high-impact car wrecks. Given the rear vehicle strikes the lead vehicle, it would appear that the rear driver caused the accident, and more often than not, the rear driver is, in fact, responsible. However, the driver who rear-ends a vehicle is not automatically at fault.

Is the rear driver fully at fault for a rear-end accident?

When a driver rear-ends a lawfully parked vehicle, the rear driver will be wholly at fault for the accident. In rare circumstances, such as a vehicle parked on the highway, the lead vehicle may be at fault. However, placing blame on the owner of a parked vehicle for an accident is customarily futile.

Whether at a traffic light, stop sign, or in the middle of the roadway, a driver must avoid colliding with a stopped vehicle. Drivers should operate at an appropriate speed while maintaining a reasonable distance when approaching other vehicles. While in traffic, a driver should expect changes in pace, thus, requiring a need for more attentive driving. A stopped or slowing vehicle should be anticipated. A lawfully stopping or slowing lead driver will not be at fault for a rear-end accident they were involved in.

Can the lead driver be at fault for a rear-end accident?

If a lead driver slows or stops the vehicle, the rear driver must drive appropriately to avoid striking the lead vehicle. The New York State Vehicle and Traffic Law (VTL) § 1192(a) requires that “The driver of a motor vehicle shall not follow another vehicle more closely than is reasonable and prudent, having due regard for the speed of such vehicles and the traffic upon and the condition of the highway.” Moreover, the rear vehicle must leave a sufficient amount of space between the lead vehicle so other drivers may occupy the lane without danger (VTL § 1192(b)). A lead vehicle may brake suddenly due to the presence of an obstacle entering their path of travel. (A lead vehicle may suddenly break due to the entrance of an obstacle that would be interfering with their path of travel). Usually, it is appropriate for a diver to brake if another vehicle enters the roadway in a sudden manner, or if a pedestrian walks out into the road. Both scenarios exhibit unanticipated events on a roadway. In the described events, the rear vehicle has the same duty to stop as the lead vehicle. Furthermore, stopping or slowing for traffic control devices (i.e., red lights, stop signs) are a standard part of driving and alone, cannot be the cause of rear-end accidents. However, if the lead vehicle brakes abruptly for no lawful reason, because they were lost and/or not paying attention, the lead vehicle may be assigned fault. Braking suddenly for answering the phone, texting, any smartphone use, reading directions, eating, smoking, changing the radio, applying makeup, or due to the influence of drugs and alcohol are reasons a lead driver could be at fault for a rear end accident.

The law requires that all vehicles have properly functioning brake and taillights (VTL §375). This rule is designed to provide a clear indication of the presence of the vehicle alongside its size, shape and location. Brake lights indicate to other drivers when the brakes are being applied, and thus are used to alert others that the vehicle is slowing or stopped. The safety of all participants on the roadway is compromised when a vehicle has no rear light or inadequate rear lighting. Other drivers have muffled indications from that vehicle. As a result, rear drivers may not receive adequate forewarnings necessary to avoid a collision. Thus, a driver with brake or taillights that function improperly could carry a portion of liability for a rear-end accident.

A rear driver may be operating their vehicle in a reasonable and prudent manner, when another driver abruptly merges in front of the rear driver. When the lead vehicle merges suddenly and/or without warning, the rear driver’s ability to stop or avoid an accident is hindered. In such an event, the lead driver can be at fault for the rear-end accident. New York traffic laws require that a vehicle “shall not be moved from such lane until the driver has first ascertained that such movement can be made with safety” (VTL § 1128). The percentage of fault for the lead driver will be determined by how sudden and abrupt their maneuvers are when entering into the rear vehicle’s path of travel.

Aggressive driving involves multiple violations of the Vehicle and Traffic Laws and endangers others on the road. Road rage is a criminal offense that often involves using your vehicle as a weapon or for competitive racing. In either situation, those who drive recklessly frequently cause accidents. If a lead vehicle drives aggressively or with road rage and those actions contribute to a rear-end accident, then the lead driver will be at fault. In a rear-end accident, if the lead driver intentionally breaks to harass others or as an act of aggression, then the lead driver could find themselves liable if the rear-vehicle rear ends them.

If it is safe, a driver may reverse their vehicle on the roadway. The traffic law states, “the driver of a vehicle shall not [reverse the vehicle] unless such movement can be made with safety and without interfering with other traffic.” See, VTL § 1211(a). If a lead vehicle is reversing on the roadway and a rear-end collision occurs as a result, then the lead driver can bear partial fault for the accident. The reversing has to, in fact, cause or contribute to the rear-end accident for the lead driver to bear fault.

While it is not the most common cause of motor vehicle accidents, orchestrating accidents for insurance fraud does happen. Assuming there is sufficient proof to support the allegation that a lead vehicle intentionally and fraudulently causing an accident, then the lead vehicle could be at fault. Moreover, the driver of the lead vehicle and their accomplices could be criminally prosecuted.

Do you need a lawyer if you were involved in a rear-end accident?

If you are injured in an accident, unless it is 100% your fault, you can be compensated for your damages. In any motor vehicle accident, blame will be alleged by all parties, even if such allegations are false. At Tocci Law, we protect our clients from being assigned fault based upon unfounded claims.

Frequently, lead drivers do not have the opportunity to avoid a rear-end accident, given they are less likely to foresee the accident. However, this does not disregard the fact that a lead vehicle may contribute to a rear-end accident. In New York, percentages of fault may be assigned to each party rather than on an all-or-nothing basis. Given the intricacies of each case, it is beneficial to contact a lawyer after a rear-end accident. Here at Tocci Law, we understand that every case is unique. If you have questions about a rear end accident you were involved in, we are happy to discuss your case. Call the Law Offices of Jennifer G. Tocci, P.C., (631) 343-7676 to schedule a confidential consultation. 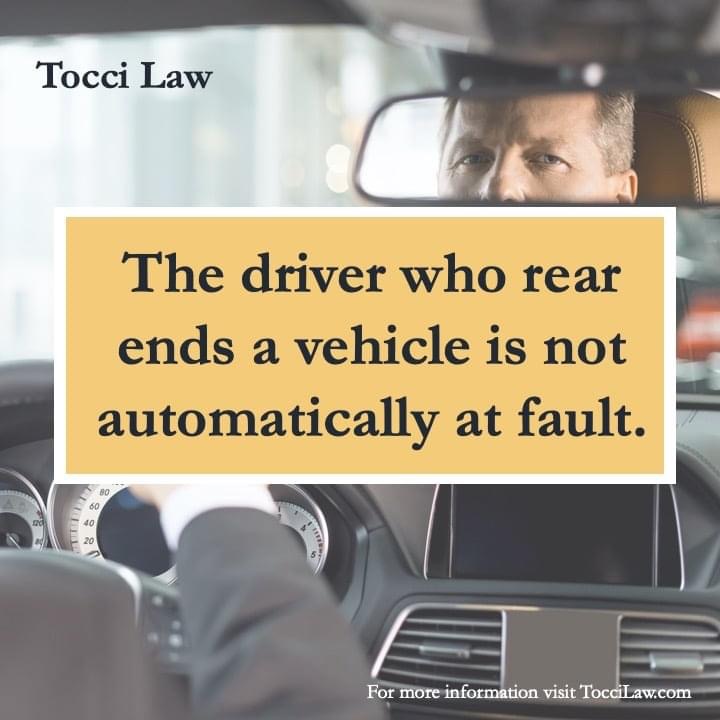