Why Auto Accident Cases Require “Serious Injuries” When Other Injury Cases Do Not:

If your injuries are caused by another person, you may be able to sue the responsible person/parties. The strength of your case or the amount you can sue for is based upon the seriousness of your injuries.  The severity of an injury directly correlates to the short-term and future costs. The more serious the injury, the more pain and suffering experienced, daily life is affected, love one’s lives are affected, and the more past and future medical expenses. In addition to heightened costs, serious injuries are expected to cause pain and suffering and changes in income and daily activities for longer periods of time than less serious injuries.  It follows logically that an amputation is more serious, and thus worth more than a scratch.

In New York State, you can sue the at-fault party for your injuries. There is no minimum injury requirement to start a lawsuit- except in cases where your injuries involve a motor vehicle.  In New York, you have to be more injured to sue in a car accident case than in other personal injury cases. Every personal injury case is predicated on the severity of the injuries for the purposes of valuating the damaged suffered by the injured individual. It is only in car accident cases where injuries need to meet a certain threshold (known as the serious injury threshold) to qualify for a lawsuit. But just how injured do you need to be to start a successful lawsuit against the responsible party?

A plaintiff (person who initiated the lawsuit) suing for personal injuries arising out of the use or operation of a motor vehicle must establish that he/she has suffered a “serious injury.”  Insurance Law § 5102(d) defines a serious injury as a personal injury resulting in:

If none of the above-enumerated injuries are present, then the defendant (person being sued) can have the case dismissed. [Sidebar: those who have not suffered a serious injury can bypass the requirement by proving they suffered a basic economic loss exceeding $50,000.] While the first categories are easily understood, it is tougher to know without the interpretation by a personal injury attorney which injuries fit into the last three categories. If unclear cases are not properly litigated, the injured party could be left with no legal remedies.

Those who pass away, experience broken bones, become disfigured, lose a limb or permanent function of a body part, and/or lose a fetus automatically meet the serious injury threshold. We do not need to rely upon the law to understand that these injuries are serious. Medical records and fact-based proof of such occurrences are rarely objectionable. Although, if the defendant has reason to believe the plaintiff’s records are incorrect or exaggerated, his/her attorneys will refute it.  In many cases, the defendant will concede that the plaintiff suffered a serious injury and will instead focus on blaming the plaintiff or another party in an effort to limit their legal responsibility.

Car accidents frequently result in injuries involving spinal discs, nerves, muscles, and ligaments. These injuries vary in severity, and their existence alone, without more, does not meet the serious injury threshold. In several cases, these injuries do not cause symptoms, require medical treatment, and may resolve on their own. However, the presence of these injuries may be severe enough to prevent entire use and movement of the body part. At times, these injuries could be permanent and extremely life altering. As such, to determine if a serious injury has been sustained, the extent and severity of the injuries must be examined. It is the plaintiff’s burden to demonstrate that his/her injury is “significant,” “consequential,” “permanent,” or satisfies the 90/180-day rule.

The Court of Appeals (the highest court in NY) sets forth the type of proof required to exhibit the plaintiff suffered a serious injury. In Toure v. Avis Rent a Car Systems, Inc., (a court case re-decided by the highest court in NY), the Court laid the ground rules that a plaintiff must show objective proof of an injury and that it is “significant,” “consequential,” “permanent,” or satisfies the 90/180-day rule. Thus, complaints alone are not enough to establish a serious injury. For a plaintiff to prove to the jury that he/she suffered an injury, medical records documenting the injury and the tests performed leading to those findings, are required.

A plaintiff is permitted to establish a serious injury based on the injury inhibiting the performance of all or substantially all of his/her daily activities for 90 of the first 180 days after the crash.  However, this is not a legal loophole around the requirement for a medically documented injury. Contrarily, to rely on the 90/180-day rule, a physician must medically restrict the plaintiff from such activities during the applicable time period.  Moreover, those records need to be documented by treating physicians within that 180-day time period. Medical records created months or years after the accident stating that activities should have been or were restricted are untimely. Affidavits and complaints by the plaintiff verifying restriction of activities are not enough to establish the 90/180-day rule. However, such affidavits may bolster well documented medical records.

Why you need an attorney:

The law in New York is strict when it comes to serious injuries in a motor vehicle accident. Serious injury standards may prove difficult for the plaintiff if the foundation is not laid properly. The court will dismiss a case if the plaintiff cannot produce acceptable forms of medical proof of a serious injury. Deficiencies in your case can be caught early and corrected when a personal injury attorney is involved.

Schedule an appointment for a free, confidential personalized analysis of your situation after an accident, contact the Law Offices of Jennifer G. Tocci, P.C. (631) 343-7676. 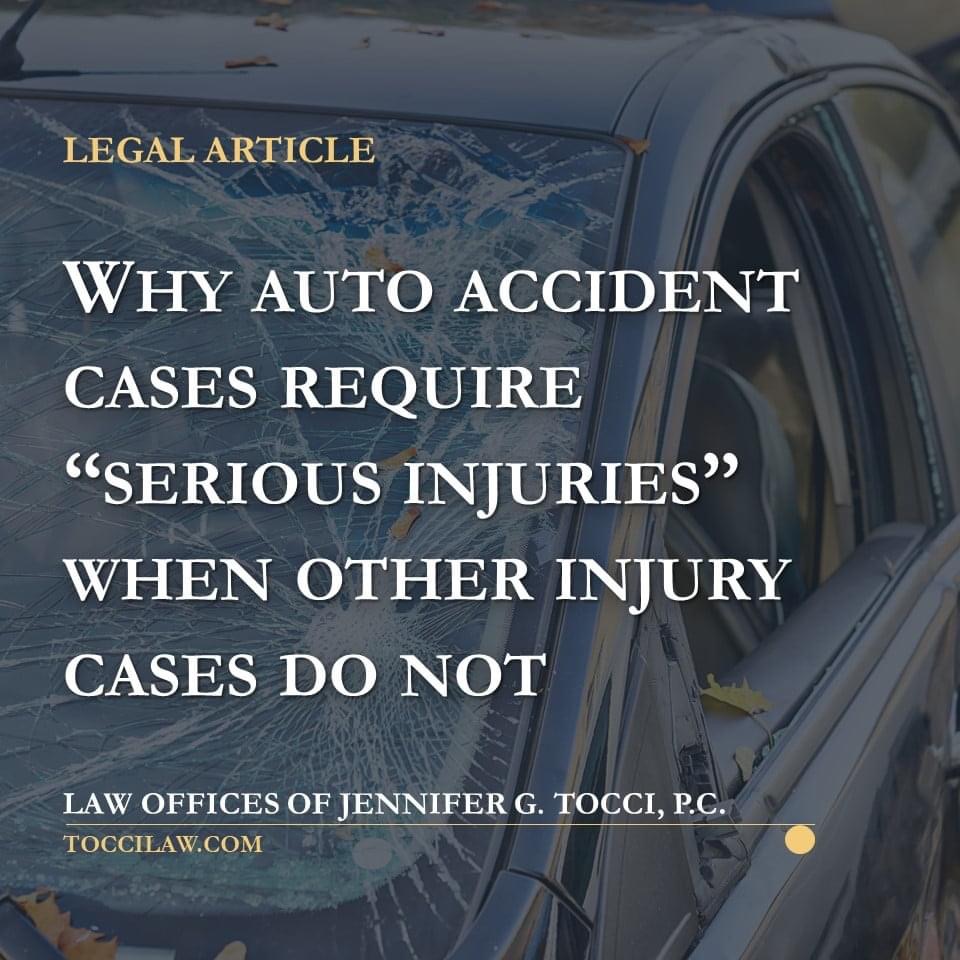