Potholes & their Contribution to Auto Accidents on LI

The recent winter weather and snowplows have left the roads in disrepair. If you have been driving on Long Island lately, you may have noticed the increased number of potholes, which are so numerous they seem unavoidable. Potholes can damage tires, rendering your vehicle undrivable in the middle of the Long Island Expressway or sending you careening into oncoming traffic. Either way, accidents caused by potholes are on the rise.

What causes the potholes?

Potholes are depressions in the roadway caused by the deterioration of the pavement. Potholes vary in size, but some are large enough to damage a car or cause an accident. In fact, potholes are a common cause of personal injuries and auto accidents. On Long Island, potholes are created during the freeze-thaw cycles that occur during the winter months. When water seeps into cracks in the pavement, it expands and weakens the road surface. As vehicles drive over the weakened pavement, it breaks apart and forms a pothole. The salt used to prevent black ice is abrasive and wears down the gravel. Those defects in the pavement are damaged further by the snowplows. Potholes can be extremely dangerous, especially if they are located in a busy intersection or on a stretch of road with heavy traffic.

According to the New York State Insurance Association, pothole-related insurance claims have increased by 50% in the past five years. In 2017, there were nearly 14,000 pothole-related accidents reported in New York State. Of those accidents, almost 500 resulted in personal injuries and six were fatal. Here are some tips for staying safe.

How can you protect yourself?

Use defensive driving. The best way to avoid pothole-related accidents is to drive cautiously and be aware of your surroundings. If you see a pothole, slow down and try to maneuver around it. If you can’t avoid the pothole, make sure you hit it at a safe speed so that you don’t cause additional damage to your vehicle.

Slow down. This will give you more time to spot potholes ahead and allow you to swerve around them if possible. If you can’t swerve, slow down as much as practical to minimize the damage.

Watch for puddles. Puddles can mask potholes, so it is important to be extra cautious when driving through them. Slow down and keep an eye out for any bumps in the road.

Stay alert. Distracted driving is dangerous under regular circumstances, but with the current conditions of the roadways, hitting a pothole can exacerbate the loss of control of your vehicle.

If you are able, avoid driving too close to others, even when in separate lanes. In the event another driver hits a pothole and loses control of their vehicle, you may be caught in the crossfire. Keeping a safe distance between you and other vehicles and avoiding driving in others’ blind spots can decrease the chance of being involved in a pothole-induced auto accident.

Who is responsible for accidents caused by potholes?

It is a myth that you cannot sue a driver who hit a pothole for personal injuries. While it may seem like an unpreventable occurrence, drivers are responsible for maintaining control of their vehicles. If you are injured as a result of an accident caused by a driver striking a pothole, you can submit a claim against that driver.

In addition, you could have a claim against the other driver and the party responsible for maintaining the roadway (typically the county, town, or state). The government may be responsible for accidents caused by potholes that should have been repaired. For example, in 2016, a woman from Long Island filed a lawsuit against the New York State Department of Transportation (DOT) after she was hit by a car while riding her bike. The woman claimed that the DOT was aware of the dangerous condition of the road but failed to repair it in a timely manner. As a result, she suffered serious injuries that required hospitalization and months of physical therapy.

Are the potholes being repaired?

When you should you speak to an attorney?

Speak to an attorney as soon as possible. In a case involving a pothole, it is important to preserve evidence before it is repaired. Additionally, if the government is responsible for your injuries, the time to file your claim may be seriously shortened (read: 90 days). 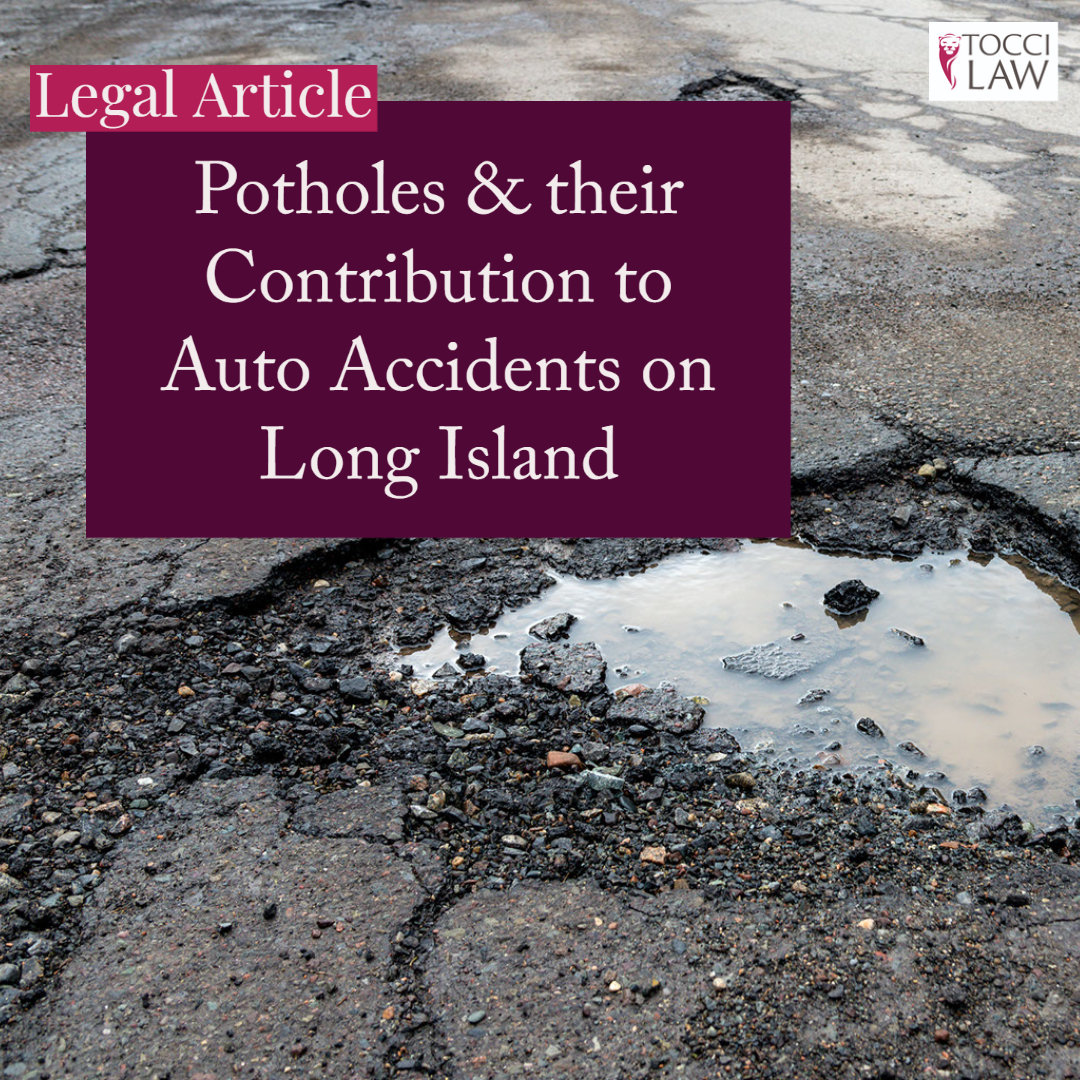