On Tuesday, February 23, 2021, at approximately 7:00 a.m. PT, golf legend, Tiger Woods, was involved in a one car motor vehicle crash in Rancho Palos Verdes, California. The eleven-time PGA Player of the Year was seriously injured, suffering multiple fractures to both his legs. Although he was found conscious at the scene, Los Angeles (LA), California Fire Department describes the crash as “near-fatal.”  First responders found the Genesis GV80 SUV lying on the driver’s side door, trapping Woods inside the vehicle. Additionally, due to his serious leg injuries, including an open fracture, even if the vehicle were right-side-up, he would be unable to free himself. Fortunately, no other vehicles or individuals were involved in the car accident.

If you see something, say something:

Hindsight is always 20/20. TMZ reports that the director of the television show “Grown-ish” witnessed Tiger Woods speeding and nearly striking the director’s vehicle the morning of the crash. It is easy to ignore a near miss, or interpret it as a fortunate event, however, reporting unsafe driving could prevent injuries and save lives. If the witnesses reported the incident, it may have been prevented. If you witness reckless driving that concerns you, it may be wise to report it to the police.

Tiger Woods was speeding at the time of the car accident. We all know that speeding can cause car accidents. Speeding impacts braking time and distance, decreases a driver’s control, and accentuates impact in the event of a collision. The speed limit is determined, in part, by how safe it is to travel on a particular roadway. Factors, such as, curves, blind spots, and slopes, all influence a speed limit determination. In Tiger Woods’ case, he was noticeably speeding. However, it is projected that speeding, combined with the downward slope of the road and the bend, all played a roll in Tiger Woods’ vehicle being tossed from the roadway. If Woods were traveling at the appropriate speed, he may not have been thrown over a median, across three lanes of highway, and flipping the vehicle. Luckily, there were not many drivers on the road at the time, because this easily could have been a multiple vehicle calamity.

There is speculation that Tiger Woods was running late to teach a golf lesson to Drew Brees. He was expected to arrive at 7:30 a.m., and was seen leaving his hotel, which was approximately an hour away from his destination, at 7:00 a.m. He was reportedly agitated and impatient when stopped, and as soon as he was able to proceed, he abruptly took off. Reducing the travel time by 50% is difficult goal. It is easy to relate to choosing to speed to arrive earlier; however, the risk of injury and death outweighs being on time, even in the most seemingly important events. The effort Tiger Woods made to be on time, caused him to not arrive at all.

Fortunately, the golf pro was wearing his seatbelt at the time of the accident. Most importantly, seatbelts prevent an occupant from being ejected from a vehicle during a car accident. Moreover, they reduce and prevent an occupant from being thrown around the inside of the vehicle. When an airbag is deployed, as in Tiger Woods’ case, seatbelts effectively reduce the likelihood of death caused by airbags.  Tiger Woods’ seatbelt contributed to saving his life.

The more safety features, the better:

First responders hypothesize that Tiger Woods’ Genesis GV80 SUV likely aided in saving his life. Although he was theoretically ignoring the vehicle’s safety sensors and warning signals while driving, the vehicle structure and airbag components prevented Woods’ vehicle’s hood and doors crushing his body when the car flipped and rolled. While it is true that Tiger Woods has plenty of money to spend on a luxury vehicle, you do not have to spend $50,000+ on a motor vehicle for it to have lifesaving safety features. When purchasing a vehicle, it is wise to research the safety feature options between the different vehicles in your price range.

Tiger Woods has a spotty driving history. In addition to be involved in prior motor vehicle accidents, he was previously arrested for driving under the influence of alcohol. While there are currently no indications that he was under the influence of any substances that could have impaired his ability to operate his vehicle, there were no sobriety tests administered. In any event, if you or your child has a history of serious driving offenses or alcohol/drugged-driving related incidents, take notice and take precautions. [Sidebar: The New York State Department of Motor Vehicles defines “serious driving offenses” as a fatal accident, a driving-related penal law conviction, conviction of two or more violations for which five or more points are assessed, or 20 or more points from any violations.] Partake in a defensive driving course, a driver refresher course, and consciously break bad driving habits before they cause accidents. [Pro tip: a defensive driving course could reduce up to 4 points from your NYS driving record and provide you with a car insurance discount.]

History also repeats itself in the sense that there have been several prior car accidents at the same location of Tiger Woods’ accident. Use added caution around known dangerous roadways. Hopefully, Tiger Woods’ accident will raise awareness to those who regularly travel this section of the roadway.

This office does not represent Tiger Woods. This article is strictly intended for the entertainment and knowledge of our viewers. All of us at Tocci Law wish Tiger Woods full and speedy recovery. We hope he gets back on the green soon. 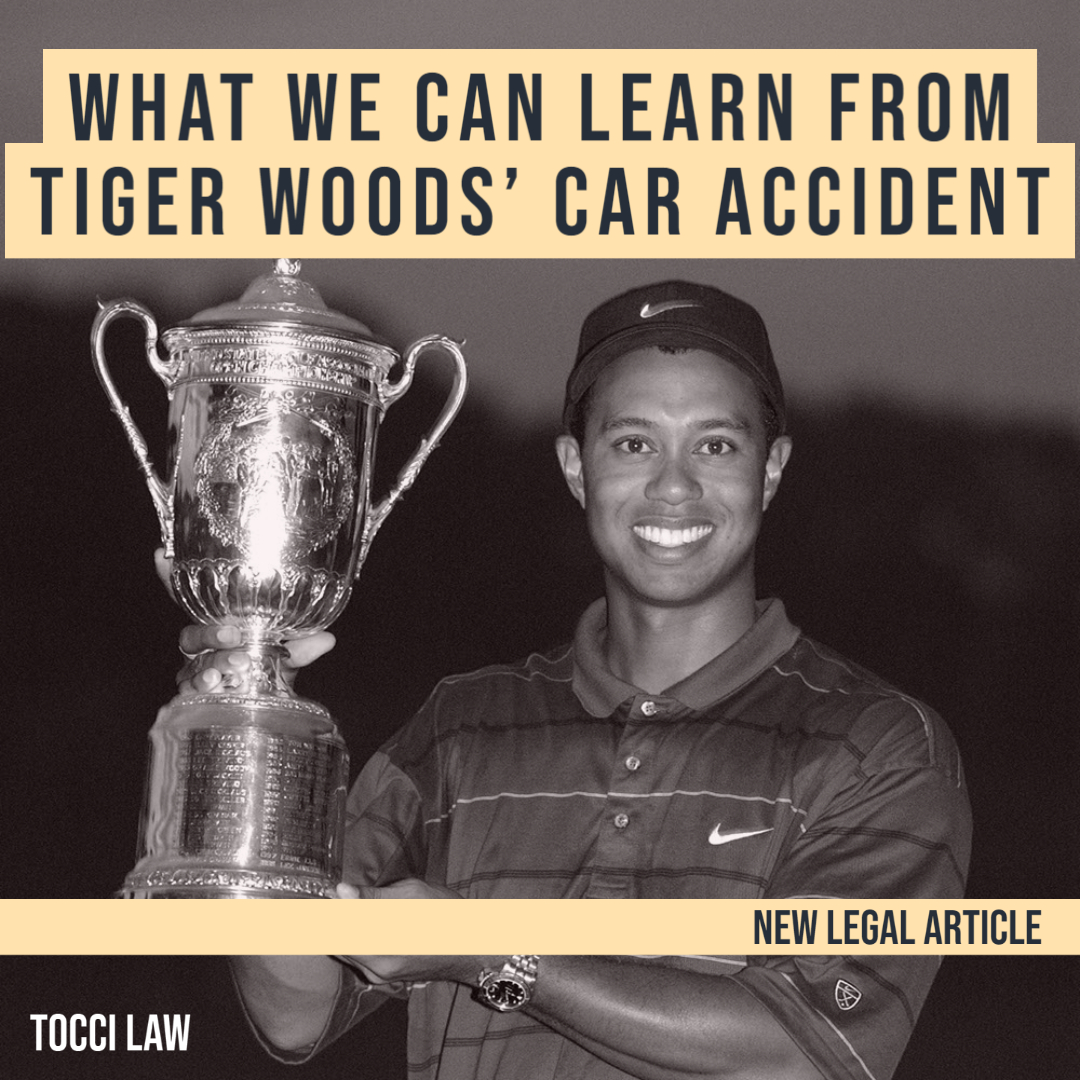